Set in the foggy ruins of an obliterated airport in Ukraine's disputed Eastern regions, The Fallen forces the player into a confusing skirmish that knows no heroes. It tells the stories of ordinary people with ordinary lives, that ended up on this battlefield for different reasons, but all met the same faith in a senseless civil war tainted by nationalism and propaganda.

The Fallen is currently being developed by gold extra with the aid of Andreas Leitner and Christian Knapp. The current version is a first demo and should give you a glimpse of the intended result. We'ld appreciate any feedback, bug reports, etc. 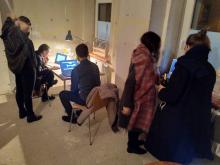